WHO IS DR. PRINCE?

Alice M. Prince, Ed.D. is a proud native of St. Louis, Missouri, and a graduate of St. Louis University, where she received her Bachelor of Science. She went on to Webster University in St. Louis, where she obtained a Master of Arts in Communication Management with an emphasis on Crisis Communication. In her pursuit to achieve higher academic excellence, Dr. Prince went on to receive a Doctorate in Educational Leadership.

Dr. Prince is the recipient of multiple prestigious awards: Economic Empowerment, 2019; Excellence in Workforce Development, 2018; Community Trailblazer, 2018; Phenomenal Woman Award, 2017; Women Who Inspire, 2017; Phenomenal Women in Leadership, 2016. Dr. Prince is on the Board of Directors for Catholic Charities, and a member of Delta Sigma Theta Sorority Incorporated.

She is the host and Executive Director of Good Morning Saint Louis television show. She is married to Carlton Prince, has three children, two dogs, and one grand dog. Dr. Prince is a notable Children’s Author and loves to play the harp. She released a single on iTunes, “Issa Vibe.”
​
Recently, Dr. Prince is an international best-selling author. The countries include US, Canada, Germany, Italy, UK, France, and Brazil. 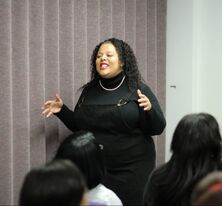